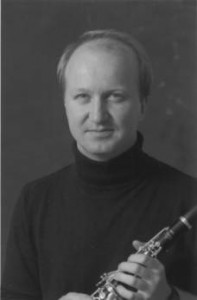 Described as one of Canada’s fine clarinetists, Keith MacLeod brings to Victoria a wealth of experience and insight. He has played across Canada and the United States for such orchestras as the Seattle Symphony, the Vancouver Symphony, and the Milwaukee Symphony. He is heard broadcast on the CBC as both a recitalist and chamber musician as well as for his spoken insights into the craft of music making. Yamaha Canada has engaged Mr. MacLeod as a “Yamaha Artist” to tour and promote the art of clarinet playing across Canada. He has been as far abroad as Spain giving master classes and recitals.

Keith MacLeod was born in Quebec City, raised in Manitoba and finally settled in British Columbia. He began serious study of music in Vancouver with Wes Foster and Ron De Kant. He then traveled to Chicago to further his studies with the legendary clarinetist Robert Marcellus.

Keith has been with the Victoria Symphony for the past 25 years. It is in Victoria where he and his wife Jennifer chose to raise their daughters Heather and Bronwyn.