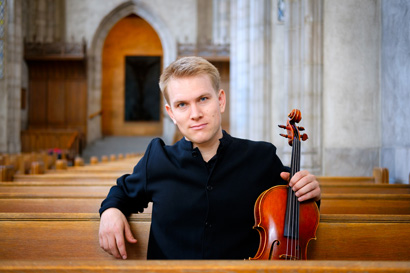 A native of Rosebud, Alberta, Keith Hamm is the Principal Violist of the Canadian Opera Company Orchestra.

Keith received his training at The Glenn Gould School of Music under the instruction of Steven Dann, and at the Mount Royal Conservatory under Nicholas Pulos. Other influences include Pinchas Zukerman, Mark Fewer, the London Haydn Quartet, and formative summers at the Chamber Music Programme at Le Domaine Forget.

Keith is an alumnus of the International Musicians Seminar at Prussia Cove, the Sarasota Music Festival, and Masterclasses at The Banff Centre. He has been featured on CBC Radio, Classical 96.3 and has been named one of Canada’s Hottest 30 Classical Musicians Under 30 by CBC.

A dedicated chamber musician, Keith has performed at the Ravinia Festival as guest violist with The Royal Conservatory’s ARC Ensemble and the Amici Ensemble. Festival appearences include the SweetWater Music Festival, Ottawa Chamberfest, Music & Beyond, Westben Concerts, and Chatter in Albuquerque, New Mexico.

Keith is the Founder and Artistic Director of The Rosebud Chamber Music Festival in Rosebud, Alberta, Canada. He performs on a viola made by in 2001 by Joseph Curtin and a bow by James Tubbs.