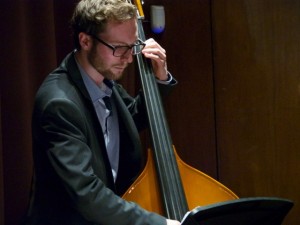 Canadian upright bassist Jeff Gammon is in his final year of a Bachelors of Music in Jazz Performance from Capilano University in Vancouver, BC. Jeff is a sought-after emerging musician in Vancouver playing with well-known Vancouver creatives such as Steve Kaldestad, Jesse Cahill, Bill Coon, Brad Turner, Hugh Fraser, Dave Sikula, and Cory Weeds among others. Through invitations by many of Vancouver’s top musicians, Jeff is a regular at the city’s festivals and jazz cafes. Jeff teaches private students and is thrilled to be back for a third year as teacher’s assistant to Jodi Proznick at the Vancouver Symphony Orchestra’s annual Summer Jazz Workshop. As a busy and versatile performer, Jeff has played in pit orchestras for Theatre Under The Stars and Align Entertainment, played at the 2014 TD Vancouver Jazz Festival as part of the Dave Sikula Trio, Vancouver’s CBC’s Musical Nooners and also the Harmony Arts Festival in Nova Scotia. Jeff’s growing reputation as a flexible, open and multi-disciplinary bass guitarist has catapulted him into performances with national and international artists such as Naoko Sakata, Mike Murley, Ian Froman, and Randy Brecker. In 2014, Jeff traveled to Yellowknife (NWT) and throughout Nova Scotia and PEI with Blues/Gospel group The Sojourners where he learned the craft of living on the road. Jeff can’t remember a time when he wasn’t playing music, but when he picked up the bass in his early teens, it changed the course of music for him. Jeff attended a performing arts high school where he earned Best Senior Musician, and later went on to be awarded Most Improved Musician during his pursuit of a Music Diploma in Jazz Performance at Calgary’s Mount Royal University and even received the Linton Garner Scholarship for jazz while attending his latest year at Capilano University. In his spare time, you’ll find him in one of Vancouver’s many music stores looking to build his collection of jazz greats on vinyl.