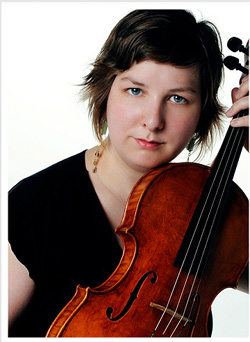 Jane went on to complete her Bachelors of Music in Performance, on viola, at the University of Victoria under the tutelage of Joanna Hood, of the Lafayette Quartet.

In her summers off Jane continued her musical education by attending Symphony Orchestra Academy of the Pacific, the Banff Centre and the Orford Arts Centre.  These programs developed her ensemble playing and her own technical and musical proficiency.  At these programs Jane was able to study with Karen Tuttle, Andre Roy, Steven Dann and Evan Wilson.

After completing her Bachelors, Jane remained in Victoria for two years teaching private violin, fiddle and viola lessons. Jane also played with Trio Esprit and the Victoria Chamber Orchestra, under the musical direction of Yariv Aloni.  Mr. Aloni also instructed Jane on the viola, preparing her for auditions for her Masters of Music.  Jane was accepted in to the studio of Andre Roy at McGill University.  She completed her Masters of Music in Performance on viola in May 2009.  Jane is a great advocate of new music and commissioned a work for solo viola from Marcin Swoboda, a young Canadian composer.  Mr. Swoboda’s piece, Beard Moss on Mount Finlayson was performed at her final Masters recital.

After completing her Masters, Jane became the violist for the Silver Birch String Quartet based out of Sudbury, Ontario.  While travelling to the Banff Centre and to Standford University SBSQ has had the opportunity to study with Henk Guittart (formerly of the Schoenberg String Quartet), Tim Ying (formerly of the Ying Quartet) and Scott St. John (of the St. Lawrence String Quartet).  Jane is looking forward to her fourth season with SBSQ and recording the complete chamber works of Robert Lemay.