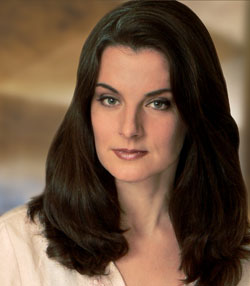 Jan’s association with Music by the Sea’s Founding Director, Christopher Donison, began in 1993 at the Shaw Festival of Canada in Niagara-On-The Lake. He was Shaw Festival Music Director and she debuted there as Dorothy Shaw in “Gentlemen Prefer Blondes”. Since then, they have worked together on projects including musical theatre and live jazz concerts, but their mutual adoration for the music of George Gershwin and the two Symphonic concerts in tribute of his career which they performed in Victoria BC and Kingston , Ontario are Jan’s favorite performances with Mr. Donison to date.

Jan has made her career in Canadian theatre for the past 22 years. Predominantly a performer, she has acted, danced and sung on stages from Richmond, BC to Charlottetown, PEI.

Selectively, she has spent six seasons with the Shaw Festival, appeared in twenty production at Edmonton’s Citadel Theatre, was an original member of the original Canadian cast of Les Miserables and is now forging a career as both choreographer and director. She is also a devoted gardener, cook and student of Bikram yoga. Namaste, y’all.

Having lived twenty odd years in Ontario and twenty odd years in Alberta, she now makes her home in Port Hope, Ontario in a gorgeous historic house build circa 1860 and newly renovated with blood, sweat and dried out vocal chords. Jan is absolutely thrilled to be spending these precious days in Bamfield and to once again be working closely with her extraordinary colleague and friend, Christopher Donison.