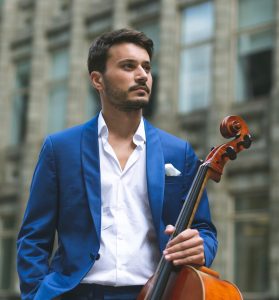 Idlir Shyti is an Albanian cellist based in London, he has performed as a soloist with orchestras such as Sudwestdeutsche Kammerorchester, Southbank Sinfonia, Orchestra del Conservatorio di Santa Cecilia, Tirana Philharmonic Orchestra, Hounslow Symphony Orchestra, and appeared in festivals such as the Rome Chamber Music Festival, Anghiari Festival, Different Trains Festival, Leamington Festival, Cheltenham Festival amongst others.

He studied at Conservatorio di Santa Cecilia in Rome with Maurizio Gambini and Royal College of Music in London with Richard Lester. In 2018 he was awarded the ‘Diplome Superieur de Concertiste’ at the Ecole Normale de Musique de Paris under the tutelage of Anssi Karttunen. During his time as a student he participated masterclasses with distinguished musicians such as Yo-Yo Ma, Gary Hoffman amongst others.

Idlir is passionate about chamber music, he often performs with different ensembles. Recent highlights include a tour in Italy with the Allegri Quartet and a recital with Alberto Portugheis.

Since 2020, he holds a teaching position at Queens Park Community School in London and regularly collaborates with orchestras such as BBC National Orchestra of Wales, Royal Liverpool Philharmonic Orchestra, Welsh National Opera, Chineke, Southbank Sinfonia amongst others.

His debut album which includes works for cello solo by Bax, Bloch, Tan Dun and Dusapin will be released by Coviello Classics in July 2022.