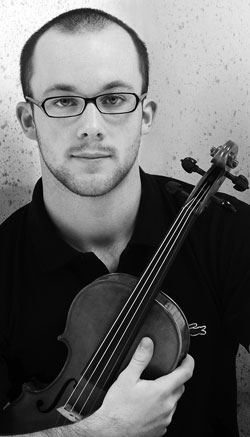 Geoff McCausland grew up in Saint John, New Brunswick, where he started violin with his father. From there he went on to McGill where he was granted a BMus in Violin Performance studying with Jonathan Crow and Andrew Dawes.

A great deal of Geoff’s education has come from his time at the Domaine Forget Summer Institute in Quebec, where he spent 8 summers studying with such teachers as Gwen Thomson, Regis Pasquier, Yehonatan Berick and many others.

Geoff is a member of the Juno-nominated Silver Birch String Quartet, through which he has collaborated with such notable artists as Peter Longworth, Simon Fryer, Joel Sachs, Joseph Petric, and the Penderecki String Quartet.

As an advocate of New Music, he has worked extensively with Robert Lemay, Yoko Hirota and 5-Penny New Music Concerts. Geoff also plays as Principal 2nd Violin with the Sudbury Symphony Orchestra.