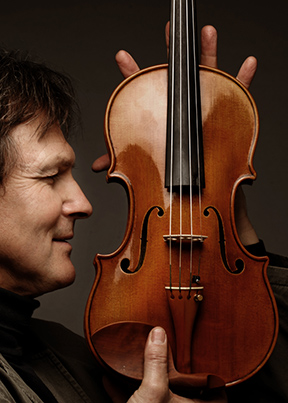 Vienna with its fruitful tension between tradition and innovation is the musical background of Ernst Kovacic. This influence shaped his vision of sound, his formal awareness and musical approach.

As violinist he has played with leading orchestras all over the world, including Vienna Philharmonic and Royal Philharmonic.

His repertory is prodigious and includes all the major works of the baroque, classical and romantic periods up to the avantgarde. Many renowed composers like Cerha, Krenek, Gruber, Schwertsik, Furrer, Haas, Neuwirth, Saariaho, Wallin, Parra, Jarrell, Holloway etc. have written for him.

He is member of the   “Zebra Trio” with Anssi Karttunen and Steve Dann.

As conductor he works with many chamber orchestras, including Deutsche Kammerphilharmonie, die reihe, klangforum wien, St.Pauls- , Scottish-, Irish-, Norwegian chamber orchestras, Trondheim Soloists, Esbjerg ensemble etc. He was artistic director of the “Vienna Chamber Orchestra” (1996-99) and of Leopoldinum Chamber Orchestra in Wroclaw ( 2007 to 2014). Since 2007 he runs the brücken – Festival in Austria , since 2009 the LEO – Festival at the NFM in Wroclaw, Poland. In 2018 he started a ORF – program series “Kovacics Discoveries”.

He is giving master classes throughout Europe and, together with Beat Furrer, directs the Impuls Academy for New Music in Graz.

AS CEO of the Ernst Krenek Foundation he promotes the works of this outstanding Austrian composer and writer.