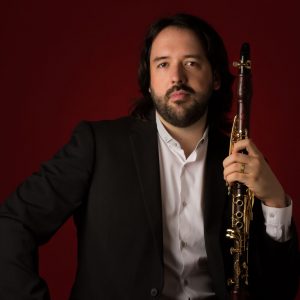 Dominic Desautels has recently been appointed Principal Clarinetist at the Canadian Opera Company orchestra and Adjunct Professor of clarinet at the University of Toronto, and is also in demand as a solo and chamber musician across Canada and abroad.

Dominic started playing the clarinet at age 15, and by the age of 21 was making his debut as a soloist with the Toronto Symphony Orchestra, as well as being invited as guest principal clarinetist with the same orchestra.

His main teachers were Robert Riseling, Joaquin Valdepeñas and Jean-François Normand, and in more recent years has received valuable guidance by mentor, James Campbell. Upon graduation from the Université de Montréal, he won the principal clarinetist position in the Orquestra Filarmônica de Minas Gerais in Brazil (2008-2012) until moving back to Canada, for the same position at Symphony Nova Scotia in Halifax (2012-2017). He won several soloist competitions in Canada, and in 2010 he notably became the first clarinetist to ever win a prize at the prestigious International Stepping Stone Competition of the Canadian Music Competition.

Dominic is the clarinet guest artist / faculty at Scotia Festival of Music and at IMC Camp. Other recent music festivals appearances include Concerts aux Iles du Bic, Ahuntsic en Fugue, Aurora Festival, Music and Beyond, the Rio de Janeiro edition of French festival Folle Journée, Mainly Mozart Festival and all-star orchestra in San Diego, and he is thrilled to be coming to Music By The Sea Festival, and on Vancouver Island for the first time this summer. Dominic Desautels is proud and honoured to be an Endorsing Artist for two world-class Canadian companies taking the clarinet worldwide market by storm in the past years: Backun clarinets (backunmusical.com), crafted in Burnaby, BC and Légère reeds (legere.com), made in Barrie, ON.