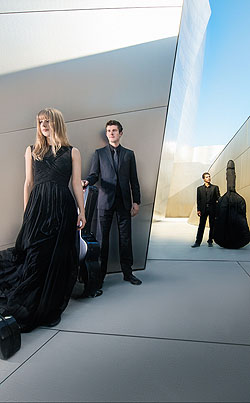 Even before their CD release scheduled for June, 2013, Trio Dinicu has been gaining much attention. Their performances feature folk music, gypsy jazz specialties and also their own original compositions. Musically, they blend the depth of classical training with the spontaneity of jazz and the excitement of European folk tradition.

Each member brings their individual personality to the ensemble, conversing in an inventive and improvisatory language associated with jazz while delivering the technique of prolific classical players. Their sound honours a select circle of musicians from the Parisian-Russian cabarets and clubs of the 1950’s to the late 90’s. This is where Romanian violinists, Russian balalaika players, jazz Manouche guitarists, French musette players and singers from all over would mingle and create new styles of music. There is also strong influence of the late jazz Manouche guitarist Django Reinhardt in the Trio’s voice.

The Trio is named after the Romanian virtuoso violinist and composer Grigoras Ionica Dinicu, who influenced the one and only Jascha Heiftetz and who was admired by Stéphane Grappelli, the world’s most famous jazz violinist.

Trio Dinicu is based in Los Angeles. Since their formation in February 2013, they have performed for enthusiastic audiences throughout California. They are scheduled to make their National Djangofest Northwest debut in September 2013.