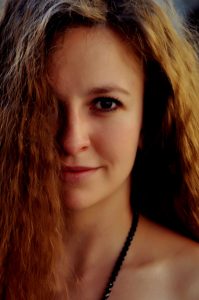 Christina Daletska was born and raised in Lviv (Lemberg) the largest city in western Ukraine. Before she could walk, she was listening to her mother giving violin lessons and practicing, and began playing herself not long afterwards. At 9 she joined the Lviv Youth Orchestra and a year later was a soloist with them in London and Copenhagen. Much later, but still as a violinist she came to Switzerland, but had her heart set on singing; once she found her ideal teacher Ruth Rohner (formerly of the Zurich Opera) she progressed quickly and won prizes at her first three international competitions a year later. Soon she was appearing in most European countries. Christina has sung leading roles, mostly in the operas of Mozart and Rossini, in Madrid, Zurich, Graz and Lyon. Concerts with world-class orchestras have taken her to The Barbican in London, the Theatre de Champs-Elysées and the Philharmonie in Paris, the Dottingholm Theatre in Stockholm, the Gewandhaus in Leipzig and many others. Recently she has been doing more new music – Pierre Boulez chose her for the Premiere of Philippe Manoury’s Gesaenge Gedanken, and next year she will create a main role in his newest opera, which will be produced in Paris, Strassbourg, Berlin, Dusseldorf and Zagreb.

After 2007 and 2013 this will be Christina’s 3rd time at MBTS, she is, in the words of her husband “the greatest fan of the west coast  you’ll ever meet”.

Outside of music, she is active in the struggle for human rights – she is an Official Ambassador for Amnesty International and is involved in programs combating food waste.