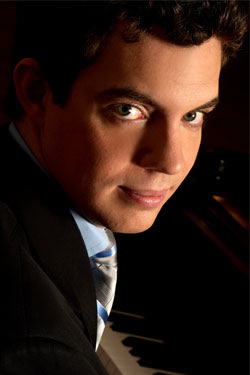 Chris Donnelly represents a new generation of jazz pianists, composers and improvisers dedicated to creating programs that are engaging, entertaining and educating.  He is continually praised for his virtuosic performances, musicality, versatility and ability to captivate audiences.

In September 2008, Chris released his Juno-nominated, debut album with Alma Records called ‘Solo,’ featuring a blend of original material and arrangements of jazz standards.  This also earned him nominations for ‘Best Recording of the Year’ and ‘Best Keyboardist of the Year’ from the 2009 National Jazz Awards.  Other recent highlights include a tour of Western Canada in October 2008, performances at the Calgary and Medicine Hat Jazz Festivals and performances in various concert halls throughout Toronto including Roy Thomson Hall, CBC’s Glenn Gould Studio, MacMillian Theatre, Walter Hall and the Richard Bradshaw Amphitheatre in the new Four Seasons Centre for the Performing Arts.

Chris Donnelly holds Bachelor and Master of Music degrees from the University of Toronto where he studied with David Braid, Gary Williamson, Paul Read, Kirk MacDonald Alexander Rapoport and Russell Hartenberger.  Upon completing his Masters of Music in Jazz Performance at the University of Toronto, Chris was awarded The Tecumseh Sherman Rogers Graduating Award for students ‘deemed to have the greatest potential to make an important contribution to the field of music.’

In 2008, the Canada Council for the Arts awarded Chris with a grant to compose new music based on the works of graphic artist M.C Escher.  With its completion, this project, entitled ‘Metamorphosis,’ will act as a follow-up to his debut recording and will be released in 2010.  Chris is grateful for the continuing support from the Canada Council.

Chris is currently a professor at the University of Toronto and has previously worked as a faculty member at the Humber College Community Music School, Prairielands Jazz Camp and the National Music Camp of Canada.