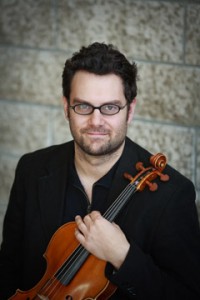 Violist Charles Pilon studied with Sonia Jeinkova at Montréal’s Marianapolis College. He earned a Bachelor of Music from McGill University under Mauricio Fuks before further studies at the University of Southern California’s Advanced Studies program with Robert Lipett. During his time at USC, he also studied with David Cerone at the Encore School of Strings and Roman Totenberg at Kneizel Hall. His viola mentors are former ESO Principal Viola Nick Pulos, and pedagogue Thomas Riebel at the Salzburg Mozarteum. Mr. Pilon has played for CBC Young Artists in Concert, and joined Orchestra London (Ontario) in the First Violin section (2003/04) before joining the Edmonton Symphony’s First Violins for the 2004/05 season. He successfully auditioned as Assistant Principal Viola of the ESO for the start of the 2005/06 season. Since his arrival in Edmonton, he has been active in the local music scene. He has performed as a soloist with the Alberta Baroque Ensemble, and co-founded Quartett Enterprise in 2009. This past fall, the quartet performed all the string quartets of Beethoven at a series of concerts. Mr. Pilon has received grants from the Québec Council of the Arts, the Alberta Foundation for the Arts, and the Canada Council. In his spare time, he enjoys hot yoga, and salsa dancing.