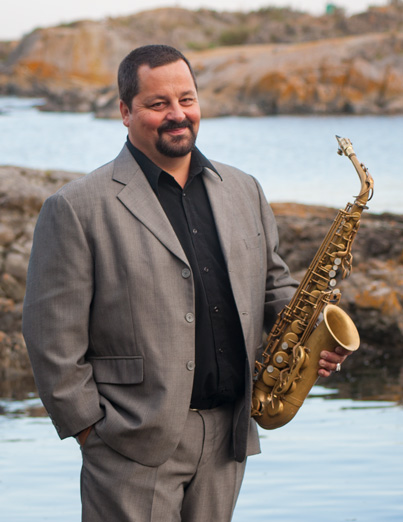 Campbell Ryga was born in 1961 in Edmonton Alberta, Canada. Campbell is the eldest son of the Internationally renowned Canadian Author and Playwright – George Ryga.

Mr. Ryga was honoured to have received the Jazz Report Magazine Award of ‘Canada’s Alto Saxophonist of the Year 2000’ presented to him at the annual Jazz Report Awards Ceremony held in Toronto in May of the year 2000. The two former recipients of this award were Moe Koffman and PJ Perry.

Mr. Ryga has received 3 Juno Awards, with two additional nominations, a Grammy nomination, and he appeared on Michael Buble’s recording ‘Crazy Love’ which received a Grammy Award in 2010. Campbell Ryga’s recordings have twice received the ‘Western Canadian Music Award’ in the Jazz category.

Campbell Ryga has toured internationally on 26 occasions, primarily to Western Europe and to Latin America, notably to the Havana International Jazz Festival, where he has been invited to perform for six consecutive years.

Mr. Ryga is a founding member of the internationally acclaimed Hugh Fraser Quintet, an All Star multiple Award Winning Canadian Jazz Quintet to which Campbell has had a long term association. Campbell’s affliation with Hugh Fraser and the Quintet began in 1981.

On top of his International touring schedule, Campbell has also been involved in cross country Canadian touring on 24 separate occasions, and has performed week long engagements at the famed Ronnie Scott’s Jazz Club in Soho – London, on 4 separate occasions.

Campbell has contributed to 72 Jazz Recordings inclusive of his four current releases as a leader, ‘Coastal Connection’ and two years later ‘Spectacular’ which was released in December of 2001 and was nominated for a Juno Award. Both of these releases were handled by Radioland/Universal Records.

More recently, Campbell recorded a release with the great New York pianist Renee Rosnes for CBC Records entitled Deep Cove which features Neil Swainson on bass and Rudy Petchauer on drums, recorded by CBC Records and is distributed by Universal. Deep Cove was nominated for a Juno Award for 2005. This recording received the Western Canadian Music Awards award for Most Outstanding Jazz Recording for the Year 2005.

In 2008 Campbell collaborated with the great Canadian Jazz Alto Saxophonist PJ Perry to record his most recent release ‘Joined at the Hip’ a live recording with Ross Taggart on Piano, Neil Swainson on Bass and Terry Clarke on Drums – available on Cellar Live Records.

Mr. Ryga continues to maintain a busy schedule as a Clinician, in association with Yamaha Canada. Campbell also maintains an active Adjudicators’ Schedule.

Campbell has sat on the Jury Boards for The British Columbia Arts Council and The Canada Council for the Arts. Campbell Ryga is currently on faculty at Kwantlen Polytechnic University in Langley, British Columbia.

Mr. Ryga has received the honor of having been placed on the British Columbia Secondary School District 67 – Wall of Fame – for excellence in his field.

In 2010, Mr. Ryga has been inducted to the Envisions Jazz Festival ‘Hall of Fame’ in honour of his accomplishments as a Performer.

Mr. Ryga is proud to be affiliated and Sponsored by the following good friends: