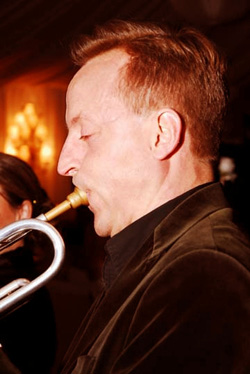 Bryn Badel a versatile musician in different genres, he performs with a wide variety of groups from British Columbia. A former symphonic musician, he performs now with groups such as his own band Lust Life Jazz Band as well as The Atomic All Stars and Kumbia

He has studied with trumpet players such as William Dimmer, Gary Guthman, Martin Barinbaum, Dominic Sperra, A. L. “Jigger” Lee and Louis Ranger. He was a finalist in the University of Victoria Concerto Competition where he received his music degree. He has been featured on many recordings, including sessions with Maureen Washington, The Axiomatics, Mindil Beach Markets, Kumbia, Gone Clear, and the Vancouver Island Symphony.