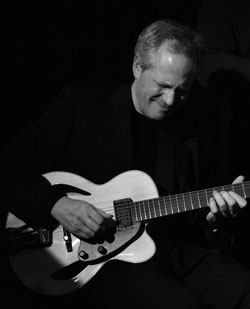 Juno nominated guitarist-composer-arranger Bill Coon is one of Canada’s most highly respected and sought after musicians as well as winner of the 2009 National Jazz Awards “Guitarist of the Year”.

Some of his more notable collaborations have been with vocalist/pianistDenzal Sinclaire and hip-hop artist K-OS.

His writing and performing has been documented on over thirty CD’s to date, while jazz ensembles and symphony orchestras throughout the world have performed his arrangements. He is a regular performer at both the Jazz Cellar and O’Doul’s Restaurant in Vancouver and tours throughout BC, Canada, and the rest of North America.

In addition to a busy performance and recording schedule, Bill is in high demand as an educator. He teaches arranging, composition and jazz guitar at Capilano University in North Vancouver and is a clinician and adjudicator for music festivals throughout Canada.