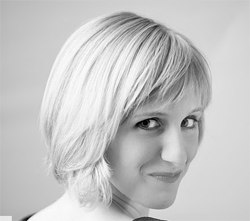 “Aurora unveils her musical passions in a voice that is at once expressive, smooth, sultry and powerful.”
(“Johnny Canuck”, Canadian Music Review).

25 year old Aurora Scott had a tough decision to make. At a young age the multi-talented performer already had a range of skills under her belt as a dancer, an actress and singer with an eclectic love of music. Lucky for us she chose to focus on her talent as a Jazz/Blues/R&B vocalist.

Originally from Nova Scotia, however based in Victoria, British Columbia, Aurora graduated from the Jazz Studies program at the Victoria Conservatory of Music. In her spare time she takes every possible opportunity to hone her chops with the city’s roster of seasoned professionals.

Her experience includes performing at private parties and music festivals as well as lead roles in professional touring companies in places as diverse as Chang Mai, Thailand; Banff, Alberta and Annapolis Royal, Nova Scotia . In 2010 Aurora made the finals in a national talent search by the Canadian military for their cultural program, and also recorded her album “Of The Dawn”.

With her ambitious spirit, true love of music and refined talent, there’s no telling what she’ll do next!