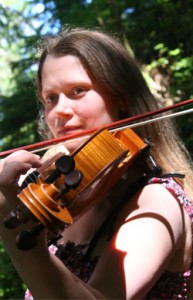 Born in Vancouver, Aidan Pendleton began her first training on the violin with Gwen Thompson at the Vancouver Academy of Music and then with Mayumi Seiler at the University of Toronto. In 2001 she switched to viola and studied with Steve Dann completing her Bachelor of Music Performance.

In addition, she studied composition with Gary Kulesha in Toronto. She completed her studies “with distinction”. She has attended Masterclasses with Professor
Hariolf Schlichtig at the Academy of Music and Performing Arts Munich, as well as Masterclasses with RivkaGolani, PeterOundjan, Arnold Steinhardt and David Zafer.