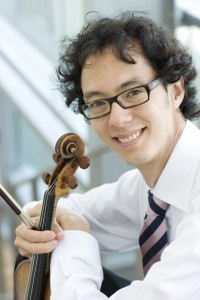 One of Canada’s leading violinists, Robert Uchida has been hailed for his “ravishing sound, eloquence and hypnotic intensity” (Strings Magazine). He has been heard throughout North America and Europe as a soloist, chamber musician and concertmaster to great critical acclaim.

He has been a regularly featured guest soloist with many of Canada’s orchestras and chamber music festivals. Among his solo appearances with the Edmonton Symphony Orchestra, Robert recently had the honour of performing Bottessini’s Grand Duo Concertante with legendary bassist Edgar Meyer under the direction of William Eddins.

Concertmaster of the Edmonton Symphony Orchestra, Robert previously held the same position with Symphony Nova Scotia and during the 05/06 season Robert performed as Associate Concertmaster of the Rotterdam Philharmonic Orchestra. Engagements as a guest leader have included projects with the Netherlands Radio Chamber Philharmonic and the Vancouver Symphony Orchestra and he has worked with many of the world’s top conductors including Valery Gergiev, Kurt Masur and Pinchas Zukerman.

Robert’s CD recordings include Sonata for Unaccompanied Violin by Andrew Violette for Innova Records, Requiem 21.5: Violin Concerto by Tim Brady for CentreDiscs and “Verklarte Nacht” and the “Alpine Symphony” under Edo de Waart as guest concertmaster of the Royal Flemish Philharmonic.

Robert’s versatility has brought him to perform with baroque specialists such as Frans Brüggen, Jeanne Lamon and Elizabeth Wallfisch, to work with composers such as John Corigliano and Richard Danielpour and to perform with Sarah Slean and Symphony Nova Scotia in a CBC video broadcast of “Parasol” arranged by Christos Hatzis. He is deeply committed to his work as first violinist of the Toronto-based XIA Quartet.

Robert was Artistic Director of the Acadia Summer Strings Festival from 2010 – 2014 and has held teaching positions at Acadia University, the Manhattan School of Music and the National Arts Centre of Canada’s Young Artist Program.

Robert performs on an outstanding Lorenzo Ventapane violin made in Naples, Italy in 1820 and uses Vision Solo Titanium violin strings by Thomastik-Infeld Vienna. He currently lives in Edmonton with his wife Laura and their two children.